Coffee ETF: Is it the right choice for investing in Coffee?

Coffee is inarguably one of the most consumed beverages in the world. Being one of the ‘breakfast commodities’ along with orange juice, the rich aroma of the brewed coffee has made it equally popular among the old and the new generation. Over 2.25 billion cups of coffee are consumed in the world daily. Over 90 percent of coffee production takes place in developing countries—mainly South America—while consumption happens primarily in industrialized economies[1]. Coffee is the most valuable and widely traded tropical agricultural commodity and 25 million smallholder farmers produce 80% of the world’s coffee[2].

Growth in the world of coffee consumption 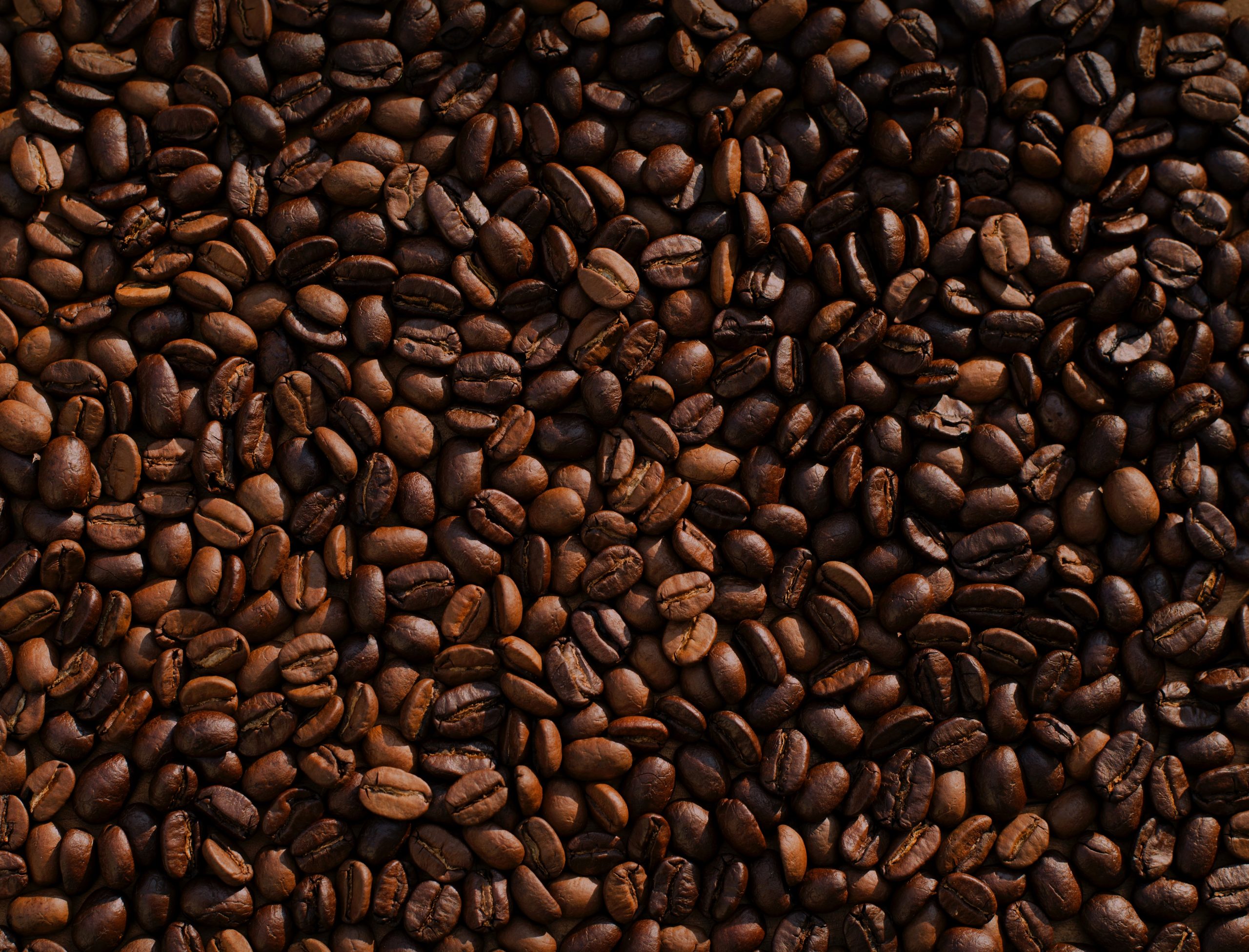 There are different ways by which you can invest in the coffee market. Like any commodity, there are a number of products and services that are dependent on or associated with coffee. Coffee plantations are an example of direct investment. However, since the majority of coffee production is concentrated in a few countries, factors such as climate change could potentially affect the investment.

There is only one kind of exchange-traded fund or ETF when it comes to coffee. These coffee ETFs track an index that holds coffee futures. One such ETF is the iPath Dow Jones-UBS Coffee Subindex Total Return ETN (JO).  Another ETF that tracks the performance of the coffee futures index is the iPath Pure Beta Coffee ETN.

An ETN is different from an ETF. While equity ETFs own the stocks in the index that it tracks(if the ETF is tracking S&P 500, then it will own stocks of all 500 companies), an ETN does not provide the ownership of the securities to the investors. They only pay the returns of the index they track. Hence, ETNs are similar to debt securities.

The iPath Dow Jones-UBS Coffee Subindex Total Return ETN tracks Dow Jones Coffee Index by holding coffee futures contract in the most nearby month. The fund also has cash collateral invested in US Treasury bills and includes the rate of interest earned. The expense ratio of the fund is 0.75%. There is no dividend yield since the fund’s holdings are futures contracts. The total assets value over $100 million.

It is to be noted that, climate changes, political upheaval, and changes in supply and demand make the coffee futures volatile. 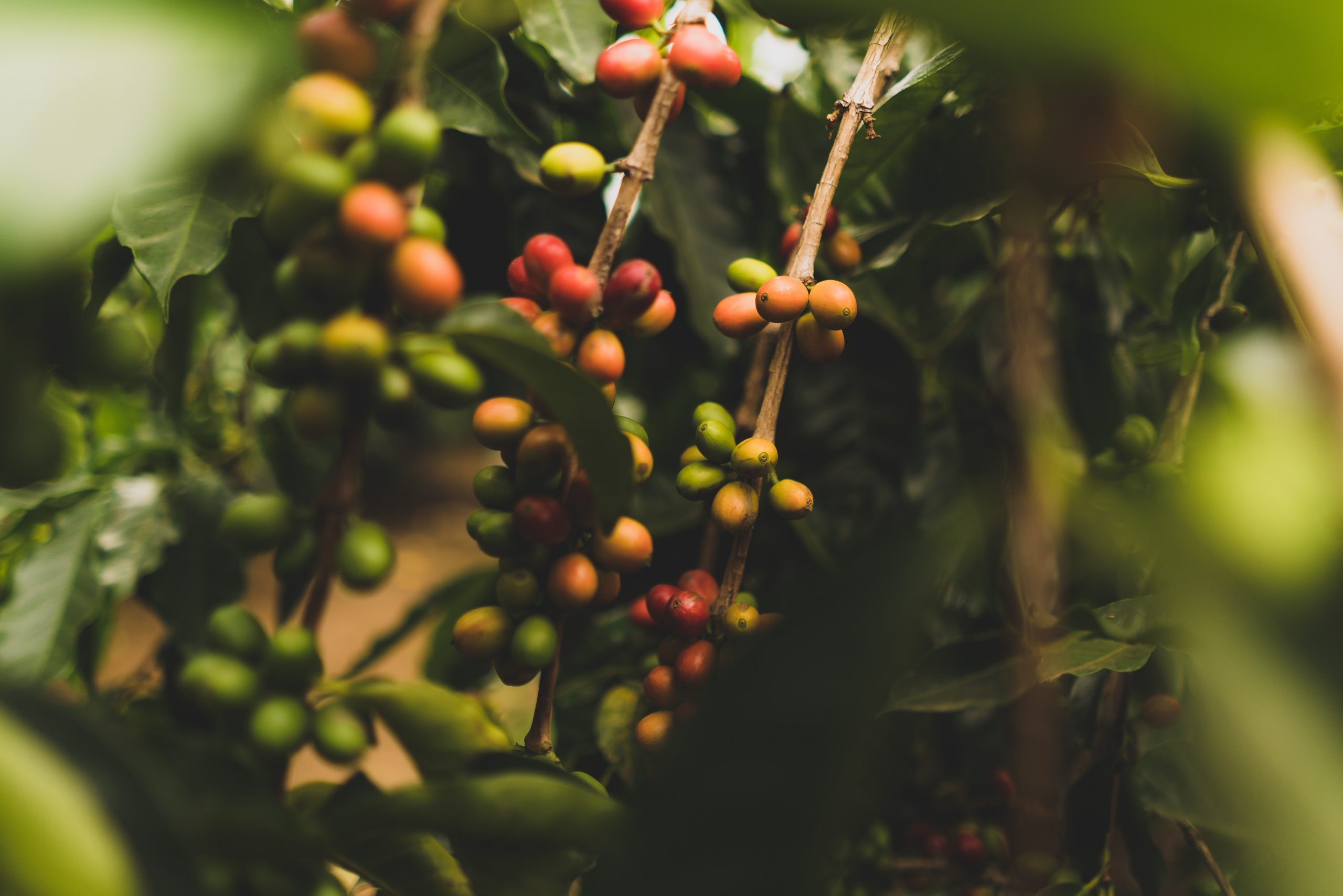 With coffee ETFs, note that you won’t essentially own any coffee companies by investing in these funds, as these track an index and hold coffee futures contracts, which is a commodity.

When it comes to investing in coffee as a physical commodity, there are a number of factors that need to be considered. Since the majority of coffee production is limited to a few countries, factors such as climate change and political upheaval can affect the prices quickly. Another factor is the demand. Since coffee is not a necessary staple like wheat or rice, the demand largely depends on discretionary income and spending patterns. Commodities, including coffee, are traded in US dollars. A strong US dollar can depress the coffee prices and a weak dollar, well, is good for prices.

Investing in coffee companies is another.

Biggest coffee companies in the world 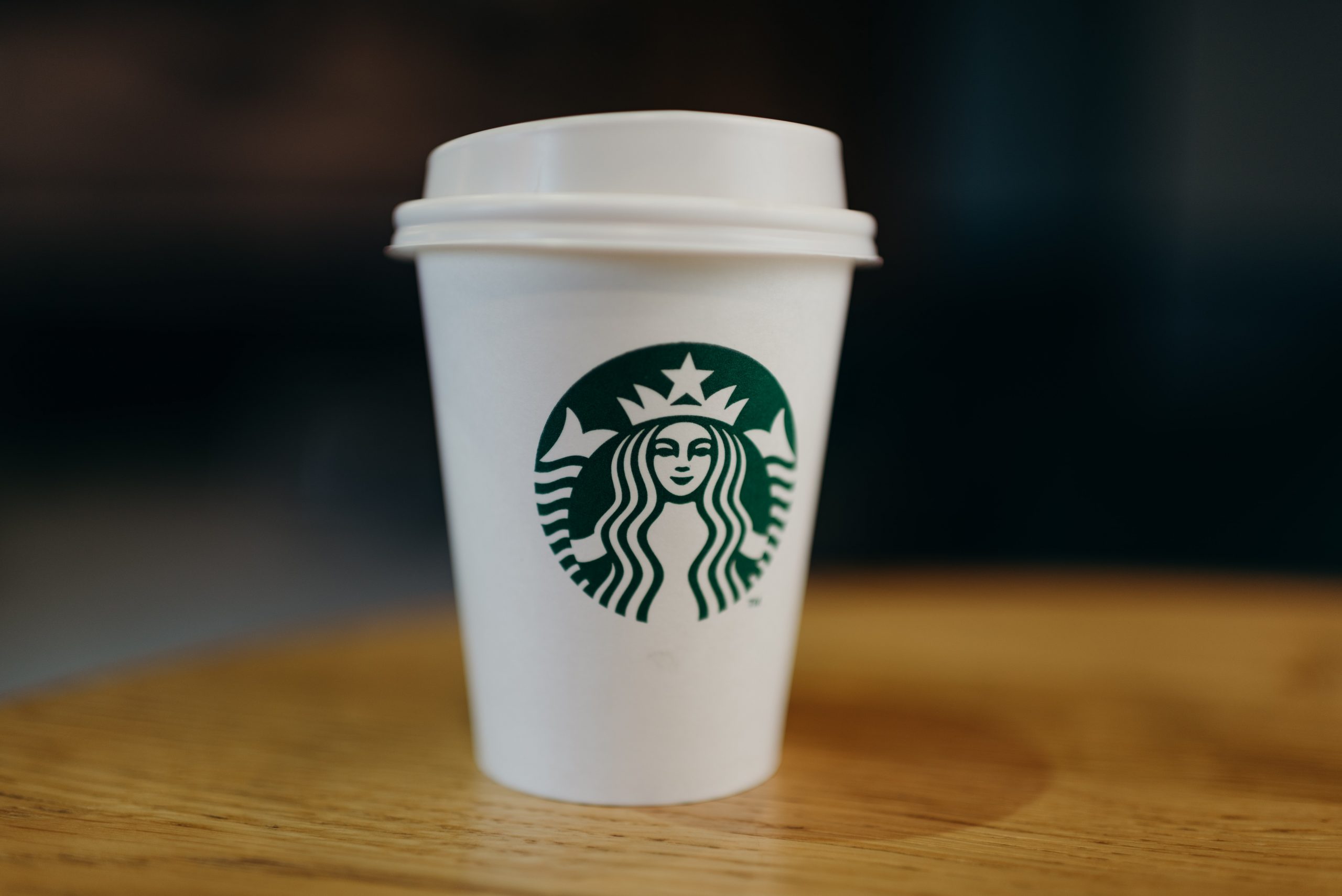 Some of the biggest companies in the coffee industry or make coffee-based products include Starbucks, Nestle, Restaurant Brands, Dunkin’ Brands, and Coca-Cola.

Starbucks is one of the most popular names when it comes to coffee and coffee shops. They are the world’s largest coffee house chain, with more than 30,000 locations spanning across 70 countries[7]. Even though Starbucks is primarily a coffee shop, it serves diverse products such as teas, hot chocolates, smoothies, iced drinks, and a wide variety of food items. Starbucks has a market capitalization of $115 billion. Their net revenue has risen from $14.9 billion in 2013 to 26.51 billion in 2019. The highest portion of the revenue came from the US with $16.65 billion[8].

Dunkin’ is the second-largest coffee company in the world. With approximately 12,900 locations in 42 countries, the company is also one of the largest donut shops in the world[9]. Their products include donuts, bagels, coffee, and munchkins donut holes. Initially acquired by Baskin Robin holding company Allied Domecq, the company was bought by Inspire Brands in 2020. Dunkin’ Brands generated approximately 1.37 billion U.S. dollars in revenue in 2019, up from 811 million U.S. dollars in 2015[10].

Tim Hortons is the third-largest coffee house in the world. With more than 4,846 restaurants in 14 countries[11], the Canadian multinational fast food restaurant chain is another name in the neighborhood when it comes to coffee. The company was purchased by Restaurant Brands International, which also owns similar brands such as Burger King and Popeyes. Their revenue for 2019 was approximately 3.34 billion U.S. dollars[12]. 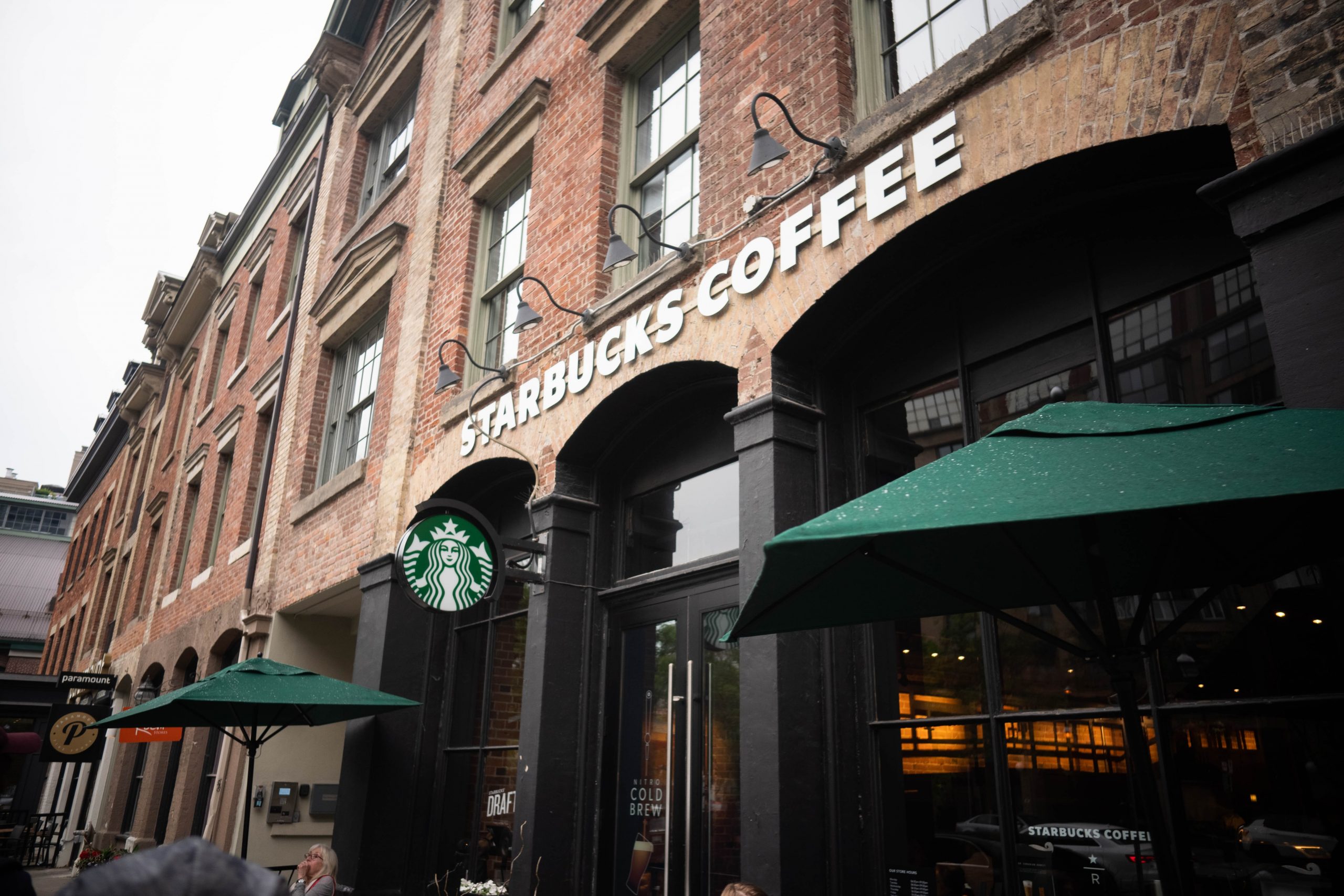 Besides the fact that they are one of the largest coffee companies in the world, there are certain aspects that make Starbucks one of our favorite companies. Many believe that Starbucks is too expensive. They are right, in a way. $5 dollar for a cup of coffee is a little too much, but is that really what we are paying for?

Over the years, Starbucks has become the go-to place for meetups, dates, and informal meetings. Rather than a coffee shop, it has become a place where you can spend time with your friends, family, or even colleagues, considering that many business meetings are also organized at Starbucks. Also, as the number of remote workers is increasing, more people are changing Starbucks into their workspace.

So, the answer is, they are not paying $5 for a cup of coffee, they are paying for the experience and ambiance that comes with it.

Here are some other factors that indicate that Starbucks is built to stand tough times.

Starbucks is one of the brands that know how to treat their customers just right and make them come back again and again. The added food options and the ambiance of the shops make the customers think of Starbucks when they think of getting a coffee. Apart from this, they have a pretty impressive loyalty program for their customers. It allows them to order ahead of time and also provides free refills of hot coffee or tea in-store. Getting to the top of the loyalty tier will get you free snacks and food as well.

This will keep them coming back.

If we look at how Starbucks handled previous recessions, they focused on winning back their customers’ trust. They started with a survey with questions about the customer experience. Seeing the huge response, they implemented many of the recommendations given by the customers. This helped them sail through a hard time. Even though this does not guarantee that they will perform the same way in future recessions, their focus on customer satisfaction will go a long way in handling tough times.

To make most of the brand loyalty and recognition they already have, they began selling their coffee in supermarkets. They also partnered with many delivery companies and have been expanding their drive-thru and mobile ordering platforms. All of these will enable customers to interact with the brand using these diverse options.

Starbucks is one of our top 20 stocks to own for the next 20 years. You can find the other 19 in our bestselling book The 8 Step Beginner’s Guide to Value Investing.