Instagram is one of the most popular social media platforms in the world right now. The number of monthly active users has grown from 30 million in 2013, to one billion in 2020. Started initially as a photo-sharing app where you could share photos and videos with your friends, it has grown to be the home of celebrities, content creators, brands, and friends across the world. Instagram is visually stunning and has features such as Stories, Reels, and Direct Message which has enabled advertisers to use Instagram to reach a youth audience of 83 million (aged between 13-17). Facebook has a market cap of $721 billion. That places FB stock among the sixth-most-valuable companies on the S&P 500 index, behind Apple, Microsoft, Amazon, Alphabet, and Tesla. Facebook shares currently trade at $251.79 per share. Facebook makes money from ads. With over 2.7 billion monthly active users as of the second quarter of 2020[1], nearly all of their revenue comes from advertising. Facebook revenue for the twelve months ending September 30, 2020, was $78.97 billion, an 18.71% increase year-over-year[2].

Their ad revenue has grown from $6.9 billion in 2013 to $69 billion in 2019, a 1000% increase in six years. During the last reported quarter, the company stated that 3.14 billion people were using at least one of the company’s core products (Facebook, WhatsApp, Instagram, or Messenger) each month. In 2021, the social media network is projected to generate $94.69 billion in ad revenues[3]. After Kevin Systrom and Mike Krieger launched Instagram in 2010, the responses came very quickly. Instagram gained one million registered users in two months and 10 million in a year. In April 2012, Facebook purchased Instagram for approximately $1 billion in cash and stock.

Information is, it was a time when Facebook has been experiencing problems with mobile users, Instagram caught their attention. Also, Twitter was the only competitor Facebook had then, which had already bid for Instagram but couldn’t pull off a deal. Also at the time, Facebook was gearing up for its initial public offering(IPO).

Fast forward to 2020, Instagram has more than 1 billion monthly users, including 500 million daily users of Stories, which was introduced in 2016 to compete against a popular feature of the same name from Snapchat. That growth has resulted in Instagram being valued by analysts at more than $100 billion, or about one-fifth of Facebook’s total market cap. Even though Facebook owns Instagram, it remains a separate platform to this day.

Facebook reaches 59% of the world’s social networking population and they have been trying to make the most of this vast userbase, a part of that has led to the launch of Facebook Dating.

What is FB Dating? Facebook Dating is an online dating platform. It allows people to find potential dating partners online using their Facebook account. The platform is currently available in 20 countries including Brazil, Canada, and the United States[5].

This is a move to take over the online dating community which has huge opportunities for growth, adding to the fact that Facebook already has 2.7 billion active monthly users worldwide. The projected revenue in the online dating market for 2021 is $3.24 billion[6]. Currently, Match Group dominates with 60% of the market share[7] and in 2019 their revenue was $2.05 billion, rising from $788 million in 2013.

Is Match Group a good investment?

We like Match Group better, as it has diverse product options like Tinder, OkCupid, Hinge, OurTime, etc. Tinder has been downloaded more than 340 million times (iOS and Android) and is available in 190 countries and 40+ languages. Even phrases like ‘swipe right/left’ on Tinder found their way to the English language and clearly depicts the impact the brand had on pop culture. Tinder’s combined annual revenue has grown 920% between 2014 and 2019, exceeding 2.2 billion US dollars in total for 5 years. 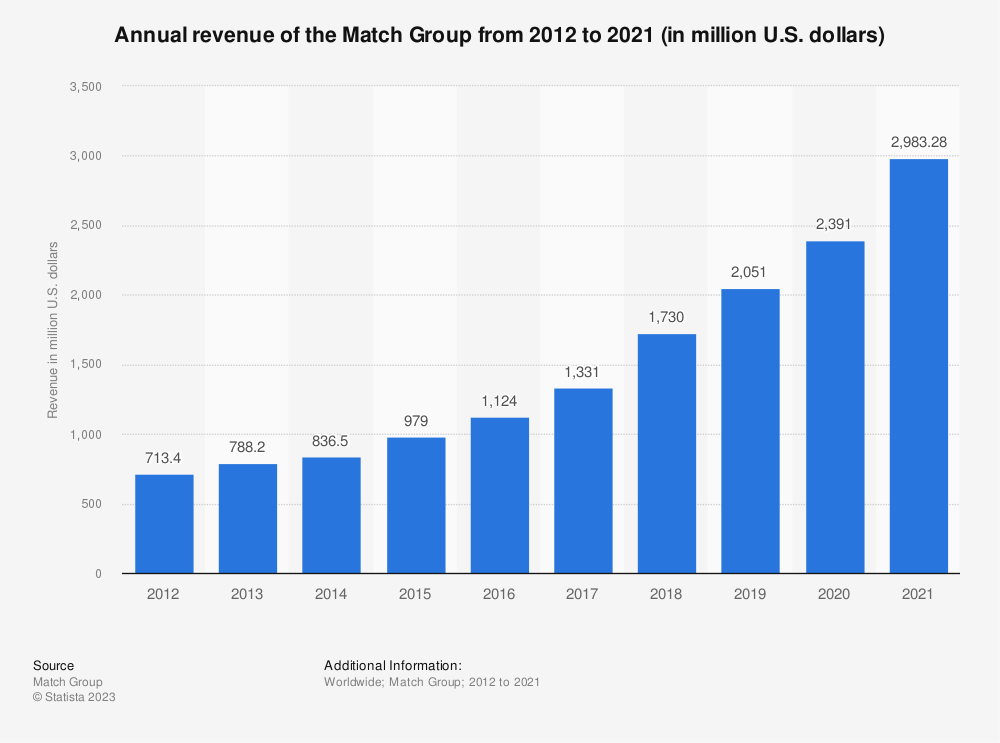 As of 2020, they have 10.8 million paid users worldwide. In addition to that, worldwide lockdowns had a major effect, as Match Group saw a fifteen percent increase in new subscribers(paid users) in the second quarter of 2020 and a record-breaking 3 billion swipes on Tinder in one day in March when lockdowns began. From March to May of 2020, OkCupid saw a 700% increase in dates[8]. Data indicates that downloads of Hinge grew over 100% year-over-year (from 2018 to 2019) and revenue increased by approximately 400%.

Match Group’s stock symbol is MTCH(NASDAQ) and the current stock price is $149.05 per share.